Written by Cait Munro, Thursday, May 1, 2014 at Artnet News on artnet.com:

1. Fred Tomaselli for Joy by Phish. It comes as no surprise that one of the kings of contemporary psychedelic art would team up with the legendary jam band on this 2009 release. Tomaselli’s work has also been used as cover art for both the Magnetic Fields and Laura Cantrell, and was included in The Wilco Book, made by the indie-rock band Wilco.

2. Richard Prince for Sonic Nurse by Sonic Youth. Prince’s Nurse Paintings may be some of the most expensive works by a living artist to buy at auction, but here’s a much less expensive way to get one: Buy a copy of Sonic Nurse, the 2004 album by Sonic Youth. You’ll get some great rock music as a bonus. What’s more, front-woman Kim Gordon has also recently joined 303 Gallery as a visual artist—though she has yet to design an album cover.

3. Jeff Koons for ARTPOP by Lady Gaga. One of the most memorable artist-designed album covers in recent history, Koons created the nude sculpture of Gaga, where it looks a bit like she is giving birth to a shiny blue gazing ball. The background consists of works including Botticelli’s The Birth of Venus, which inspired Gaga’s image. Gaga also referred to the art star in the album’s hit single “Applause,” singing: “One second I’m a Koons, then suddenly the Koons is me.”

4. Andy Warhol for The Velvet Underground & Nico. Warhol created the cover art for the debut album of what was originally the house band at the Factory, his New York studio complex. Early copies of the album featured a functional “Peel slowly and see” tab, in which the listener could peel back a flap on the cover to reveal a flesh-colored banana underneath. This cost extra money and a special machine to manufacture, but MGM paid for costs figuring that any ties to Warhol would boost sales of the album. 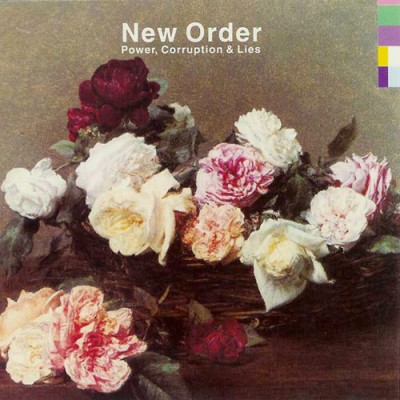 5. Henri Fantin-Latour for Power, Corruption and Lies by New Order. Fantin-Latour’s A Basket of Roses is part of the National Gallery’s permanent collection in London. Peter Saville, the art director for the post-punk band, had originally planned to use a Renaissance portrait of a dark prince to tie in with the Machiavellian theme of the title, but failed to find anything he liked. While visiting the museum, Saville picked up a postcard of the Fantin-Latour work, and his girlfriend joked that he should use it as the cover, which he then realized was a good idea.

6. Gerhard Richter for Daydream Nation by Sonic Youth. For this 1988 album, the art-savvy band chose Richter’s 1983 painting Kerze, which translates to “Candle,” the name of one of the songs on the album. The album is widely considered to be the band’s best work, and among one of the most influential rock albums of all time.

7. Banksy for Think Tank by Blur. Though Banksy prides himself on typically avoiding commercial work, he defended his decision to the do the 2003 Blur album, saying that he needed the money. The original work sold at auction in 2007 for £75,000.

Speaking in Tongues by the Talking Heads, with limited-edition LP version by Robert Rauschenberg.

8. Robert Rauschenberg for Speaking in Tongues by the Talking Heads. After their 1977 debut, the band enjoyed a prolific three years in which they released an album every year. Their fifth album, Speaking in Tongues, took three years to produce, thanks in part to the complex packaging designed by Rauschenberg. After seeing his work at the Leo Castelli Gallery, front-man David Byrne approached him about doing the design for their next album. Rauschenberg agreed, but said he wanted to do something different, and thus produced a transparent plastic case with artwork and credits printed on three 12″ circular transparent collages, one per primary color. Only by rotating the LP and the separate plastic disc could one see—and then only intermittently—the three-color images included in the collage. Rauschenberg won a Grammy for the design.

Horses by Patti Smith, with cover photo by Robert Mapplethorpe.

9. Robert Mapplethorpe for Horses by Patti Smith. Much has been said about the friendship between photographer Robert Mapplethorpe and punk legend Patti Smith. The pair met on Smith’s first day in New York City in 1967, when she accidentally wandered into his apartment looking for someone else. The photo was taken by Mapplethorpe using a Polaroid camera and natural light. When Smith’s record company made attempts to edit the image, she would not allow it.

10. Salvador Dalí for Lonesome Echo by Jackie Gleason The comedian, actor, and musician’s 1955 album featured a painting by his friend Dali, which he eloquently described thusly: “The first effect is that of anguish, of space, and of solitude. Secondly, the fragility of the wings of a butterfly, projecting long shadows of late afternoon, reverberates in the landscape like an echo. The feminine element, distant and isolated, forms a perfect triangle with the musical instrument and its other echo, the shell.”

11. Ryan McGinley for Með suð í eyrum við spilum endalaust by Sigur Ros. Icelandic band Sigur Ros not only used this carefree photograph by McGinley for their fifth album, but the music video for “Gobbledigook,” the first track from the album is inspired by his work as well. The image was originally used as a flyer for a show of McGinley’s entitled “I Know Where the Summer Goes”, which found its way into the band’s inbox just as they were trying to decide what image to use for their album cover. McGinley later directed the sublime music video for the band’s single “Varúð.”

Red Hot Chili Peppers’ I’m With You with cover art by Damien Hirst.

12. Damien Hirst for I’m With You by the Red Hot Chili Peppers. Hirst has designed several album covers for The Hours, but given the popularity of the Chili Peppers, his work for them was much more widely noted. The band’s 10th studio album was released in 2011, and the Hirst-designed cover was described by Anthony Keidis as “[An] image. It’s art. Iconic. We didn’t give it its meaning but it’s clearly open to interpretation.” (Hirst’s interactions with the music industry go back much further, though: He directed the music video for Blur’s break-out hit “Country House.”) 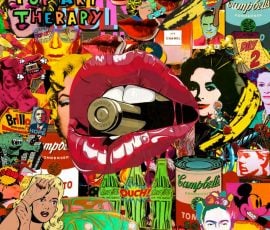 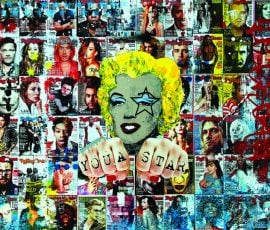