Tilda in a Box

I don’t like to ruin a good surprise, but according to The Huffington Post: Tilda Swinton, the eccentric 52-year-old actress, known for her roles in films such as “Michael Clayton” and “We Need to Talk About Kevin,” surprised MoMA patrons in New York in March and April by appearing in an exhibit called “The Maybe,” in which, the New York Daily News reports, she “slept on an unadorned white pallet in a transparent display case.” 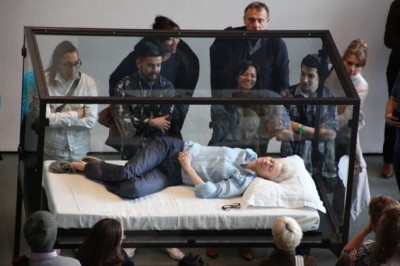 The ‘ Moonrise Kingdom’ actress has had a busy week in art. She helped launched the ‘David Bowie Is’ exhibit at the Victoria and Albert Museum on Wednesday. Image: New York Daily News

According to Gothamist, which has photos of the exhibit, the actress will be appearing sporadically all year. “Tilda Swinton will be doing unannounced, random performance art pieces sleeping in a glass box in the museum,” a source told the site. “Today is the first performance. Each performance lasts the whole day the museum is open.”

The MoMA said in a statement: “An integral part of The Maybe’s incarnation at MoMA in 2013 is that there is no published schedule for its appearance, no artist’s statement released, no no museum statement beyond this brief context, no public profile or image issued. Those who find it chance upon it for themselves, live and in real—shared—time: now we see it, now we don’t.”

Swinton debuted “The Maybe,” a collaboration with artist Cornelia Parker, in 1995 in London, and later reprised it in Rome.

An aptly titled piece of performance art due to its random, unannounced appearances, I’m tempted to ask our readers here on WallSpin, “Is it art?” C’mon, tell us what you think!

The Art Newspaper’s Visitor Figures: The Highlights
The annual world-wide museum attendance survey was released April 2nd showing the most popular museums and exhibits of the year. Here are just a few of the highlights ...
Bjork at MoMA
A lot has been said about the Bjork show at MoMA. Here's an article from the Economist called, It's Oh So Disappointing...