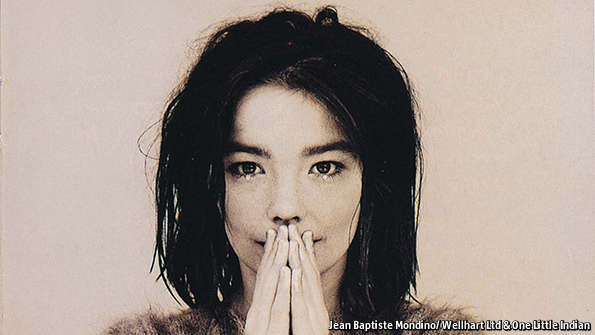 A lot has been said about the Bjork show at MoMA. Here’s an article from the Economist called, It’s Oh So Disappointing:

WHEN the Museum of Modern Art (MoMA) in New York announced it was devoting a mid-career retrospective to Bjork, an Icelandic singer, some critics pounced. The show is all part of MoMA’s “self-suicidal slide into a box-office-driven carnival”, complained Jerry Saltz in New York magazine. Others wondered why the museum was tarting itself up as a marketing vessel for a pop star with a new album coming out.

With the show now open, it would be nice to report that the museum has had the last laugh. As a subject, Bjork is indeed worthy of formal scrutiny. She has spent decades crafting music that transcends genres. Her compositions are full of surprises, mixing techno beats with string arrangements, layering bells, beeps and purrs of wildlife. An avid collaborator, she has worked with many film-makers, fashion designers, producers and other artists, reliably coaxing out some of their best work. Then there is that voice—high, strong, clear, sometimes girlish, always unmistakable. No one sounds like Bjork. With this show, several years in the making, MoMA could have set a new template for a multimedia museum experience, blending music and video, text and artefacts. This retrospective could have mapped out Bjork’s creative process, placing her prodigious talent in some kind of context. Oh, this show might have done so many things. Alas, the only thing it reliably does is waste people’s time.

Wellhart Ltd. and One Little Indian

Prepare for some long queues. The line just to buy a timed ticket snakes out of the door and down the block. Then there’s the queue to get into the show, in a cramped, two-storey pavilion specially built in the museum’s atrium. Expect to wait again before being allowed to enter a modest screening room to see “Black Lake”, a specially commissioned video installation (ie, a music video) featuring a song from “Vulnicura”, Bjork’s emotionally devastating new album. And finally there’s the queue to enter another larger screening room where 32 of her music videos play back-to-back. All of this time spent waiting is not merely irksome; it also serves to build anticipation for a show that feels flimsy and unfinished. 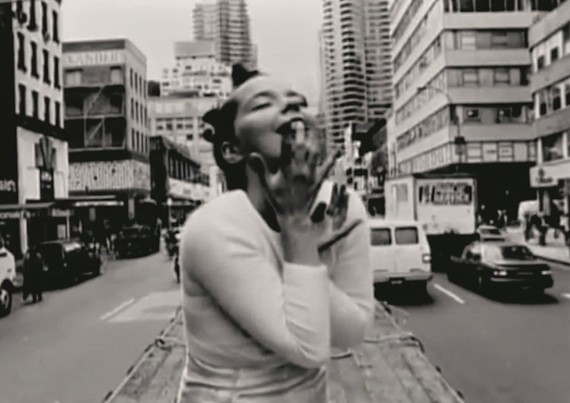 Wellhart Ltd. and One Little Indian

The centrepiece, such as it is, is “Songlines”, which winds around the upper level of the pavilion. This “psychographic journey” through Bjork’s career should take 45 minutes, according to the whizzy audio guide, but it is easy to run through these strange, intestinal galleries rather faster. In part this is because it is difficult to get a sense of pace and space in this awkward maze of an exhibition, arranged chronologically by album. But also it is because there isn’t that much to see.

There are vitrines of Bjork’s notebooks filled with scribbled lyrics and notes. Then there are a number of her costumes, dresses, masks and other ephemera, some of which are genuinely astounding. For example, there is the “Bell Dress”, designed by Alexander McQueen (a frequent collaborator), which Bjork wore in her music video for “Who Is It” in 2004. There is also the swan dress designed by Marjan Pejoski, which the singer famously wore to the Academy Awards in 2001. But the way the displays have been assembled makes them feel less like sensuous art exhibits and more like the kind of celebrity flim-flam one might find in a Hard Rock Café.

The audio guide hardly helps. It features a somewhat insipid storybook-like narrative written by Sjón, an Icelandic poet and long-time collaborator. “Once there was a girl, a girl who lived alone in a lava field in a forest,” the guide begins. Bjork’s entire biography—her early years as a musician and punk-rocker in Reykjavik, her solo work in London, her 13-year love affair with Matthew Barney, an artist and the father of her second child—is somehow squeezed into a sing-song storyline that sounds like the fruits of a creative-writing exercise. “She was the hunter…and all was full of love,” the syrupy guide intones. Instead of lending insight into Bjork’s career, this show merely fetishises her as some kind of pixie love-goddess from a distant land.

Not all is lost. It is worth making the time to watch Bjork’s music videos, which are well-served by a big screen and surround sound. The singer regularly works with visionary directors—Michel Gondry, Spike Jonze, Andrew Thomas Huang—and the results are often spectacular. Mr Huang’s video for “Mutual Core” from 2012, for example, features Bjork buried to her waist in shifting sands, which come alive in colourfully erotic eruptions. It is a shame that these singular films are not somehow embedded in the larger show; as it is, they can only be seen on a two-hour chronological loop. Visitors should find a comfortable spot and allow themselves to be mesmerised.

A leitmotif of love—explosive, transformative and ravaging—runs through the show. Bjork’s music is often robustly emotional, full of juicy exuberance or romantic despair. Her latest album is essentially a raw chronicle of her separation from Mr Barney, with each song assessing an increasingly desolate landscape. The film “Black Lake”, also directed by Mr Huang, features Bjork in a bleak, damp cave, mourning and purging a lost love (“You fear my limitless emotions/ I am bored of your apocalyptic obsessions”). It ends on a note of rebirth, with Bjork, now 49, in a dress of gossamer wings, walking stridently towards a sunnier unknown. Unfortunately MoMA’S strangely discordant show never quite captures this depth of feeling, or even tries to understand how the singer transforms it into compelling work. Yet Bjork once again emerges triumphant, if not unscathed, from the experience, ready for her next big project.

Artist-Made Gift Ideas
Artfully minded gift options for your consideration ranging from t-shirts to tombstones to original artwork from your favorite gallery ...
The Art Newspaper’s Visitor Figures: The Highlights
The annual world-wide museum attendance survey was released April 2nd showing the most popular museums and exhibits of the year. Here are just a few of the highlights ...