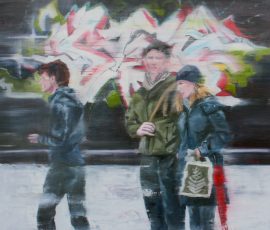 Graffiti: From the Streets to our Living Room
When we think of the word graffiti, it can conjure up thoughts of vandalism in the dark of night. However, as time passes, more and more artists have been taking this often-illegal activity onto legal walls and murals in the form of public art, and it’s taking the art world by storm. Whether it’s on a ...
The INSIDE OUT Project
...the INSIDE OUT project encourages any citizen of the world – man, woman, elder, child, religious or not, to share their face. By sharing our portrait, it is believed we are sharing our message...
Banksy iPhone App Further Blurs Line Between Gallery and Street
...motivations aside, part of the allure of street art is the way in which we do – or sometimes don't – find it. Stumbling upon a "piece" is part of the game; there's just a certain thrill that goes along with finding a piece of art completely at random...
Will He or Won’t He? Banksy at the Oscars
There's speculation that if he were to make an appearance, it would be in his disguise of choice – a bug-eyed monkey mask that he has been known to wear in films and photographs...