This coming weekend is Labor Day in the US, when many people head out of town for summer’s last hurrah. According to Wikipedia, Labor Day honors the American labor movement and the contributions that workers have made to the strength, prosperity, laws and well-being of the country. It is the Monday of the long weekend known as Labor Day Weekend and it is considered the unofficial end of summer in the United States.

Many kids don’t go back to school until after Labor Day, although some go back as early as August 1.

Labor Day reminds me of road trips, barbecues, the beach, and friends.

Do You see what I see? by Therese Lydia Joseph $572

Here are some great original artworks found on Zatista.com to help get you in the mood.

Wherever you are in the world, we hope you are enjoying the beginning of September! 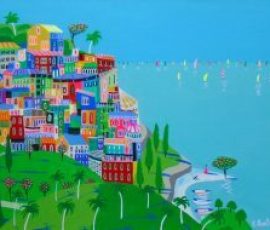 Summer’s Last Hurrah
Although summer isn't officially over in the Northern Hemisphere for 20 more days, it may feel officially over now that we're past Labor Day. In honor of what is a favorite season for many, we wanted to keep the love alive with images and colors that we feel represent the season of freedom, play, travel, and sunshine ...
Spring Holidays
If you find yourself with down time this coming weekend while the grandparents, aunts, uncles or cousins are occupying your kids, be sure to put your feet up and shop our on-line gallery for a minute or two ...