Black and white photography is beautiful in and of itself, but for me, dramatic lighting can take a photo to another level. When the source of light forms a bit of an “ombre” look, it’s more than stunning.

“Unveiling Light” by Nicholas Bell is the perfect representation of this as the sun shines over the ripples in the water.

shafts of light, columns of redwood by Tom Reed $320

Tom Reed’s “Shafts of Light, Columns of Redwood” is captivating as the light shoots through the trees. It’s as if there is something sacred or angelic to be revealed among the Redwoods.

Although we do not see the source of light in this image, “Edition 2/10 Typewriter, Ickworth Hall” by Paul Cooklin illustrates the beauty of ambient light in black and white photography. The typewriter sits alone as the outside light shines through the window. 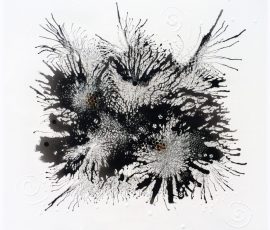 A Black & White Mood
I'm in the mood for graphic, high contrast, black and white art these days. It's the type of art that looks great in nearly any space. It's timeless. It draws your eye from across the room. It can be serious or fun, hard edged or curvy. It's versatile. Check out some of these examples and see if you're not as drawn to this style of artwork as ...
Twilight Scenes
Unless you were in the path of totality during yesterday's solar eclipse, you may have experienced an ambiance that looked a bit like twilight ...