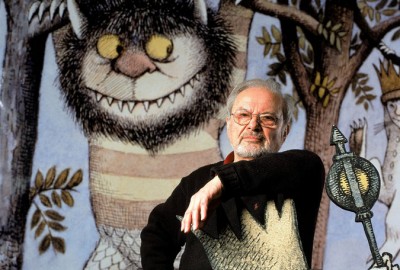 Maurice Sendak standing with a scene from his book “Where the Wild Things Are,” at the Children’s Museum of Manhattan in 2002. Credit James Keyser/The LIFE Images Collection, via Getty Images

Maurice Sendak, author of the famed children’s book, Where The Wild Things Are, lived and worked in the small town of Ridgefield, Conn. The New York Times states, “Since his death in 2012, his estate and foundation and a group of devoted local Sendakians have been working to make this town into what some day may be the primary pilgrimage site for his fans, the way Sante Fe, N.M., is for Georgia O’Keeffe or Amherst, Mass., is for Emily Dickinson, one of Mr. Sendak’s favorite authors. The urgency to create a place for the public to visit increased in 2014 when the artist’s estate, citing Mr. Sendak’s wishes late in life, withdrew more than 10,000 pieces of original artwork and other material — the heart of his archive — from the Rosenbach Museum and Library in Philadelphia, to which Mr. Sendak lent pieces for decades and which organized more than 70 exhibitions of his work.”

Illustration from “Where The Wild Things Are” by Maurice Sendak

Evidently, Sendak’s will stipulated that his home operate as a museum or research center for scholars, students, and artists, and also offer tours to the general public.

Illustration from “Where The Wild Things Are” by Maurice Sendak

As the foundation struggles to reach agreement on plans and funding, it seems a museum won’t be materializing in the immediate future, but there is still hope that something could develop over time. According to the New York Times, “the group envisions an institution that could be a tourist draw and an economic boon to this town of 25,000 residents.

maurice sendak ridgefield rosenbach where the wild things are