How Old Is The Oldest Artwork?

A handprint found in Indonesia and believed to be at least 39,900 years old Photo: Kinez Riza via Nature

A group of cave paintings discovered on the island of Sulawesi in Indonesia was created at least 40,000 years ago, reports the journal Nature in its October 8 edition. That likely makes the paintings the oldest artworks ever to be discovered.

The oldest of the newly-dated cave paintings is a silhouette of a hand, which appears to have been created by blowing red pigment over a hand placed against the cave wall’s surface. Using uranium decay dating, the Indonesian research team working on the project determined that the 10 millimeters or so of calcite grown on top of the painting was at least 39,900 years old. The finding suggests that the painting underneath is therefore slightly older.

Cave paintings on the Indonesian island of Sulawesi were found more than 50 years ago, but until now the dates of origin were not known. The art shown here has not been dated, but is stylistically similar to other art in the area now found to be around 40,000 years old. PHOTOGRAPH BY MAXIME AUBERT, GRIFFITH UNIVERSITY, AUSTRALIA

The researchers were also able to successfully date a painting of two animals, thought to be a species of “pig-deer.” The work is estimated to be at least 35,400–35,700 years old. If accurate, the dating would make the painting the earliest known surviving figurative representation made by humans.

Aside from the discovery’s intrigue from an archeological and scientific standpoint, it is also yet another blow to the view that art and culture, and the more advance cognitive capacity of the early Homo sapiens who produced it, was a European invention. Many Eurocentrist—and indeed some factions within the European political extreme-right—have held up discoveries of 35,000–40,000-year-old cave paintings in Spain’s El Castillo cave and France’s Chauvet cave as evidence of Europe’s cultural primacy.

“It allows us to move away from the view that Europe was special,” Australian archeologist and leader of the team Maxime Aubert told Nature. “There was some idea that early Europeans were more aware of themselves and their surroundings. Now we can say that’s not true.”

Other archeologists suggest that the paintings point towards the existence of such abilities before our distant ancestors dispersed from Africa. That means many older cave paintings may still await discovery. “We can expect future discoveries of depictions of human hands, figurative art, and other forms of image-making dating to the earliest period of the global dispersal of our species,” Aubert’s team told the New York Times.

“Compared with Europe, Asia has seen little fieldwork, and new finds will keep on challenging what we think we know about human evolution,” added researcher Wil Roebroecks when speaking to the AFP.

Maxime Aubert, right, and a team member work inside one of the limestone caves on Sulawesi where ancient cave art was found. PHOTOGRAPH BY KINEZ RIZA

The newly-dated Indonesian cave paintings’ existence has been known for over 50 years. However, researchers had done little further work to date them as they believed the region’s climate would have already caused anything over 10,000 years old to vanish. 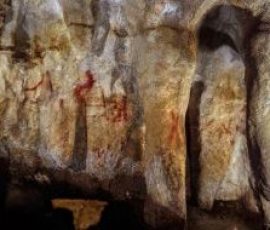 65,000 Year Old Art
The world's oldest art was found three years ago in Spain, but it wasn't thought to be the oldest art until now...