Blame it on Starbucks’ iconic seasonal Pumpkin Spice Latte arriving before the teenage summer lifeguards traded in their buoys for backpacks, but America’s food industry has undergone full-blown pumpkin madness since before back-to-school supplies went on sale.

Though the Pumpkin Spice Latte—now, due to its ubiquity, is simply referred to as “#PSL” in twitter talk—may be the ringleader of all unnecessarily pumpkin-infused sweets and condiments, it can’t be totally to blame for the recent pumpkin takeover. In fact, the beloved beverage was introduced over eleven years ago, but, according to CNBC, sales somewhat recently increased by 234% from 2008 to 2012.

“Harvest” by Anne Lively on Zatista.com

Before the Chaos & The Method Behind the Madness

There was a time when pumpkin flavor was reserved for pies, muffins, bread and the occasional coffee creamer. Now pumpkin flavoring extends beyond enhancing already-sweet desserts and baked goods; there is pumpkin spaghetti, pumpkin beer and pumpkin soy milk. Clearly, Starbucks’ supreme influence may have lit the match, but the rest of the food industry quickly caught on to the appeal—as the PSL proved, artificial pumpkin flavoring not only sweetens even the most bitter coffee, but it also invokes positive emotions and nostalgia within the consumer.

Pumpkin means autumn, which means changing leaves and changing seasons, and, ultimately, excitement for the new. Not only that, but pumpkin is reminiscent of comfort food in a happy environment, namely pumpkin pie after Thanksgiving dinner. Starbucks had the idea of bottling up Thanksgiving dessert while providing a daily caffeine kick, and the rest of the food industry caught on as more coffee lovers slurped it up.

No food trend is complete without McDonald’s joining in on the fun. Last fall, McDonald’s introduced their very own McCafé Pumpkin Spice Latte, perhaps marking the official start of the pumpkin craze. Then, among the standard pumpkin-flavored bread products and perhaps the occasional few (usually specialty or organic) brands offering pumpkin butter or pumpkin cider, came dozens of odd-sounding pumpkin-infused snacks.

For example, Whole Foods gave up their usual entrance display of sale items and flowers for a pumpkin shrine featuring dozens of ripe pumpkins along with pumpkin soda and pumpkin tortilla chips. Next time you stop by the health food store chain, pay extra attention as you walk in—you might see your favorite snack with a pumpkin twist.

“Still Life with Pumpkins” by Pavel Kasparek on Zatista.com

Overall, there isn’t any harm in this pumpkin craze—just commercialism milking the trend for all its worth. So, besides consumers knowingly succumbing to a silly (albeit delicious) food trend, pumpkin-flavored foods pose no threat. They just promote another way to celebrate the changing of seasons. God ahead and dig out your “ten extra pounds” jeans from the back of the closet! 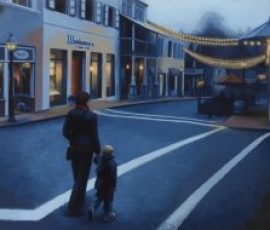 That Time of Year Again
It’s that time of year again! Grab your pumpkin spice lattes, cozy sweaters and Halloween costumes because it’s almost autumn, baby! Okay, so it may only be September, but it is never too early to get your fall on. From beautiful leaves to lighthearted holidays, let’s unpack some things that make autumn, autumn ...
“Fall” In Love With Art This Season
Fall is my favorite time of year. When the temps start dropping and the leaves start changing, the weather is perfect for long walks and harvesting. With that, fall art has always been a love of mine. It helps me to remember the season year-round ...