It’s a classical tale of missing your fame after you’re dead. Vincent Van Gogh, Franz Kafka, Johannes Vermeer, and now Vivian Maier – the New York-born nanny living in Chicago who unbeknownst to all of us, documented the world.

Self Portrait (I think Maier may have been the first to take a mirror "selfie"), by Vivian Maier, www.vivianmaier.com

Vivien Maier was an American amateur street photographer from New York. She grew up in France and spent her life traveling the world to destinations like Egypt, Bangkok, and Italy. In her early years, Vivian perfected her craft while living and exploring the streets of New York. In 1956, Maier settled in Chicago and spent her later years as a nanny for families in the North Shore neighbourhood.

It’s said that Vivian was never without her camera, spending her free time and her leftover salary on her passion for photography. But for Vivian Maier, the past time was just a hobby. Her photographs were for herself and no one else, until Chicago historian and collector, John Maloof, discovered them in 2007 at a local thrift auction. 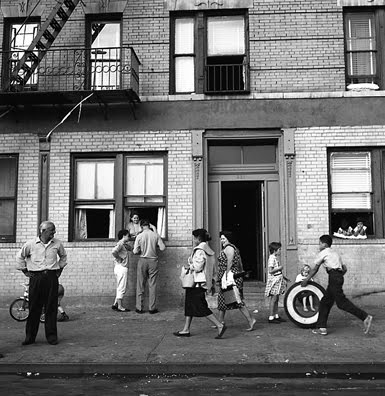 After Vivian’s death in 2009, the majority of her work was finally developed, and received critical acclaim. The photographs have since been exhibited in the U.S., Britain, Germany, Denmark, Norway and Belgium.

What is special about Vivian’s artworks is that she unknowingly captured some of the iconicism of 1950’s urban America. Just as Edward Hopper documented the increasingly alienated society of modern America in the 1920’s and 30’s, Maier captured what can best be described as the societal classes of the American 1950’s and 60’s, and vast and varying gaps in between.

Can you imagine creating a volume of work, only to keep it untouched by light, literally? The bulk of Maier’s images were found amid two (packed) storage lockers of personal belongings that were going to be thrown in the garbage. Most of what was stuffed in these two units was a giant collection of various found objects such as crushed paint cans, railroad spikes and other tchotchkes, but sandwiched between the clutter, were hundreds of rolls of color film which comprises the body of her work. 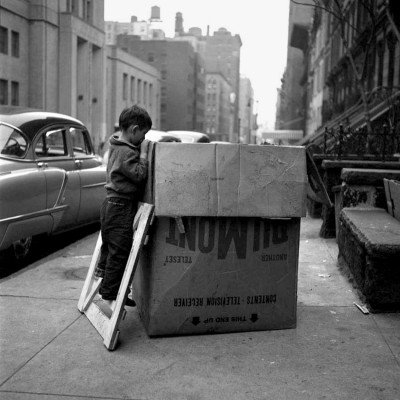 The collection of her work is summarized in a book of her photography, Vivian Maier: Street Photographer. Published in 2011, it showcases just some of the 100,000 works Vivian took worldwide between the decades of the 1950’s and the 1990’s.

For more information about Vivian’s own untold stories her book, and an upcoming documentary about the artist, visit www.vivianmaier.com. Now that I think about it, maybe I shouldn’t be so quick to judge Storage Wars?