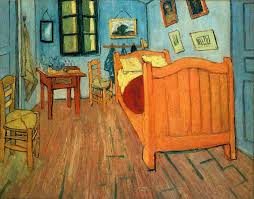 According to the Wall Street Journal last week: The modern myth of the tortured artist was launched by the turbulent life of Vincent van Gogh, whose bold paintings have been viewed as spontaneous outpourings of an anguished soul. Now, results of research into van Gogh’s work habits shed new light on the Dutchman, who emerges as less a hopeless Romantic than a diligent technician.

A research project called, “Van Gogh’s Studio Practice,” culminates on Wednesday when its findings will be incorporated into a new exhibition, “Van Gogh at Work,” which opens the newly renovated Van Gogh Museum in Amsterdam. Prior to this, there has never been such extensive research into van Gogh’s paintings and drawings.

Among the key discoveries is an understanding of how van Gogh used something called a “perspective frame”—a wooden rectangle, crisscrossed with threads—to help him accurately capture the physical world.

The Sea at Les Saintes-Maries-de-la-Mer by Van Gogh photo: http://www.vangoghmuseum.nl/

Head of Collections at the Van Gogh Museum says the frame was threaded like a grid or alternatively, threaded diagonally like a Union Jack flag. Van Gogh would look through these at his subjects, and then transfer that regulated view onto the canvas. New infrared examinations revealed that he actually traced the outlines of the threaded frame right onto the canvas, fixing a sense of order early on, and giving a hidden rigor to paintings that are admired for their wild expressiveness.

show enlargment The Garden of Saint Paul's Hospital ('The Fall of the Leaves') by Van Gogh photo: http://www.vangoghmuseum.nl/

Van Gogh was not the only artist at the time using the device – Degas also used a perspective frame, but Van Gogh used it in a distinct way. Discoveries also show that Van Gogh reused canvases quite often leaving layers of paint on a single canvas.

Until the mid-19th century, artists made their own paints, using traditional pigments. But van Gogh belonged to one of the first generations of artists who bought mass-produced paints sold in tubes. He then went on to refine his colors by mixing them together. 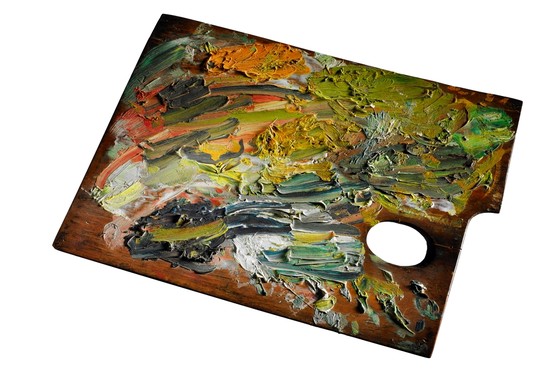 Van Gogh experts have long known that some of these paints were vulnerable to fading. Until now, the experts have relied on descriptions in van Gogh’s letters to correctly identify original colors; they have also found clues in the bits of paint on the edge of canvasses, where the frames shielded the pigments from damaging light. Now, using a combination of technologies, the project has determined something like the original appearances of affected major works. Being able to see famous paintings in their original colors can be quite shocking after the public has been viewing them in a faded state for so many years.

Visitors to “Van Gogh at Work” will be able to compare the new digital renderings [of paintings in their original colors], accessed on computer tablets in an educational section of the exhibition. In September, visitors will also be able to download an app on their own devices. In art history and conservation, fading paint has long been a problem. But now we’ll be able to see these works as the artists meant for us to see them.