Homage to the Square: With Rays, 1959 by Josef Albers

In 1963, Yale University Press published a book that would change the way people approached color. Now, in partnership with The Josef and Anni Albers Foundation and developed by award-winning design and technology firm Potion, Josef Albers’ “Interaction of Color” returns—as an interactive iPad application. This is no reissue, it’s an imaginative exploration on balance, partnering and emotion—with surprises in tow. 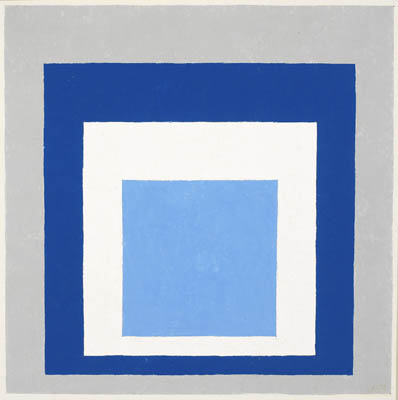 Homage to the Square: Blue, White, Grey, 1951 by Josef Albers

50 years after its first iteration as a handbook and teaching aid, this influential classic—which has inspired artist and designers everywhere—is more accessible than ever. The full digital version contains the entire text and original plate commentary. Over 125 of the original color studies, including the “flaps” and moving pieces have also been incorporated. This modernized edition doesn’t stop there.

Homage to the Square, 1966 by Josef Albers

Homage to the Square, Night Shades, 1957 by Josef Albers

There is also archival video of Albers in the classroom. In true app fashion, the Albers’ book contains an interactive color palette tool. Over 60 interactive plates and studies allow for color experimentation. Users can solve Albers’ thoughtful puzzles with a vast array of color swatches and patterns, then share and store pairings.

Homage to the Square: Tap Root, 1965 by Josef Albers

More than just an opportunity to revisit the text, this app is for anyone who wants to learn more about thinking creatively regarding color and its uses. A limited version of the Interaction of Color app is available free from the App Store on iPad and the complete version is available as an in-app purchase for $10.

10 Summer Art Exhibits
Beat the heat this summer by hanging out inside an art museum. Hopefully, one of these exhibits is in a city near you. There’s no better excuse than the heat of summer to seek a little culture and a little air conditioning at the same time...