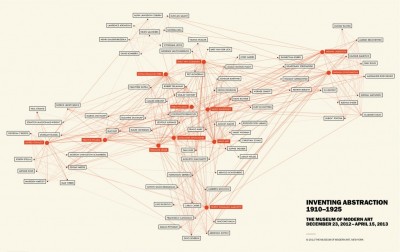 A diagram mapping the nexus of relationships of the artists in “Inventing Abstraction: 1910-1925.” When the show’s website goes live, visitors can click on the names to get information about each artist. A click on the lines will show how the connections came about.COURTESY THE MUSEUM OF MODERN ART/PAUL INGRAM, KRAVIS PROFESSOR OF BUSINESS AT THE COLUMBIA BUSINESS SCHOOL, AND MITALI BANERJEE.

In an effort to visualize the relationships between artists in upcoming MoMA exhibition, “Inventing Abstraction, 1910-1925,” museum curators teamed up with network analysis nerds to form an Excel spreadsheet of artists in the show, and then they started mapping the connections. A detail of the result looks like this:

A detail from the diagram shows Kandinsky’s vast connections.

Art News states, “As they added lines linking friends and collaborators, their map became a cross-section of what their social network would have looked like—as if Facebook or LinkedIn had existed a century ago.”

Evidently, this idea of mapping the modern art world is not new – several ‘maps’ are commonly known. Art News reports that the most influential of these is a chart conceived by Alfred Barr, founding director of MoMA in the mid 1930s: 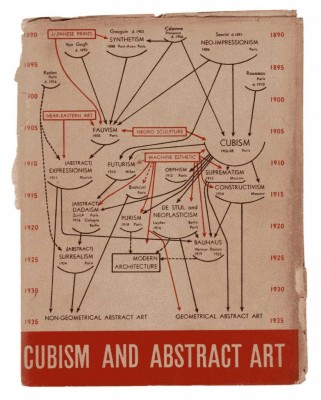 Inspired by Barr’s example, New York-based writer and curator Daniel Feral was recently co-organizing a history of street art and graffiti for Pantheon Projects when he decided to make a new flowchart:

Art News says, “Brooklyn based artist Ward Shelley renders cultural movements not so much as family trees but as elaborate living organisms. At his exhibition earlier this year at Pierogi Gallery, Shelley chronicled the genesis of science fiction, the concept of the teenager, and the 4,000-year history of the Jewish people, among other themes. The evolution of art itself is one of Shelley’s main obsessions. He has updated Barr’s chart repeatedly. Here’s a detail from a 2009 version of his art chart:

Finally, feminist pioneer Carolee Schneemann adds to the mix by drawing her own chart which, according to Art News, “looks like a constellation in one of those old maps of the night sky.”

Read more about the world of art flow charts at the link below. Beware, their curvy lines and bright colors will quickly draw you in to their weblike imagery. Flow charts – who knew it’d be such a fun way to explore art history.